In line with the international practice, the 48th Engineers day- was celebrated with a total student focus here at GNA University by Faculty of Engineering and Technology. The Indian celebrations are scheduled on 15th Sept each year as this day marks the birth anniversary of Sir Mokshagundam Vishveshvarya an engineer par excellence and a statesman (Dewan of Mysore state), who as chief engineer developed Krishna Sagar Dam and the Blocking system to take care of overflow. Introducing Bharat Ratna Vishveshvarya, the Dean of Faculty of Engineering and Technology GNA University, Prof P Thareja, exhorted the students should emulate his qualities of perfectionism, and punctuality which mark his (Vishveshvarya’s) persona attire and his commitment to good work; his work was his worship.

The portrait of great visionary was garlanded by Pro- Chancellor Mr Gurdeep Sihra. He reiterated the right envisioning of superlative conduct and of great jobs is what makes good Vishveshvarya’s to whom the society is always indebted. His ‘Nation’s Interest’ remains a benchmark of Sir Vishveshvarya patriotism which differentiated him as supporting only the good and just against any threat of losing the various perks from British rulers.

The technical presentations were proffered by Er. JP Kundra and his team who discussed the modern dimensions of societal upliftment by engineers demonstrating new projects. The presentations were oriented to mark the theme of 2015 as ‘Engineering Challenges for Knowledge Era’. The challenges discussed were autonomy of controls and non conventional energy. Er Kundra complimented GNA for the advanced curricula being offered in various programmes in line with preparedness for the knowledge era.

The celebration also displayed the projects which students of FoE&T designed and developed during their hobby classes. Inaugurating the exhibition, the Vice Chancellor GNA University Professor (Dr) Prem Kumar complimented students for having displayed good jest for experimentation, and advised some of the projects could be even attempted for IPR (applying for patent.) Of the strong contests amongst 22 projects displayed, first prize was bagged by project affecting Oil spill collection, by Gurkirat and Vinay; 2nd of magic water flow; and third: Speed Breaker Generating Electricity. The prize winners and various groups who were runners up resolved they would be gearing up for possible enhancement of capacities and capabilities of their projects.

Ms jasleen Kaur gave the customary vote of thanks. 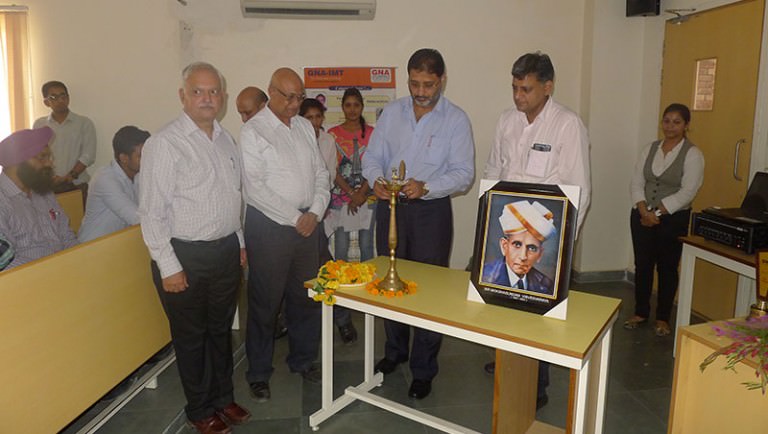