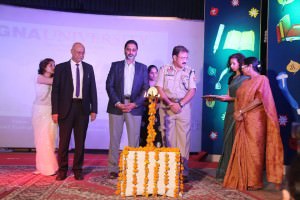 Dr Prem Kumar welcomed all the dignitaries and guests and shared the vision and mission of the festival. He said that the festival is a step to revive the literature and culture of Punjab. He ensured that PLF will keep on lifting the literature of our state through the upcoming editions. He also apprised the audience about the details of the event for the day and successfully maintained the interest amongst the audience.

Panchhi, the Guest of Honor and an eminent poet and author appreciated the efforts of the university which has taken a wonderful step to promote the literature in the coming generations. He applauded the whole event as it has connected the literature through famous poets, writers, artists etc. During his address, he overwhelmed the audience with his poetry.

Dr Ankur Sharma shared his happiness to be a part of this event and gave a productive session on ‘Craze of Theatre amongst Youngsters and its nitty gritties’. He added the theatre is all around us and urged the audience to watch and promote it. Mr. Pali Bhupinder Singh interacted one to one with the audience delivering on his named ‘The Page to Stage Process of Leading Punjabi Theatre’.

A cultural presentation, a Bhutanese dance by the students of GNA University added the flavor to the festival which shows the diversity of students the university has. Further, a theatre was presented named ‘Jhanah De Paani’ directed by Mr. Vinod which presented the social evils prevailing in the society related to women. Another play was presented by Swami Sarabjeet on the theme of corruption.

On day two also Literary Talks also took the event towards success. A Literary Talk on ‘What does it take to be a woman?’ was done by Dr Tejinder Kaur, Ms Manjit Indra and Ms Mandeep Kaur Sidhu. Another talk on ‘Transformation of a Bibliophile into an orator was done between Brig. RPS Sandhu and Mr. Guneet Paul.

The event ended with a cultural evening in which ‘Sham-e-Ghazal’ was hold by Mr. Gurdeep Singh, Sufi Gayaki was done by Ms Raj Jannat, an Instrumental performance was done by Mr. Batish Ahen Vani, and song performance by Mr. Parveen and Ms Sandeep Kaur.